Fear of flying – My flight with Maurice Clarett, 2003 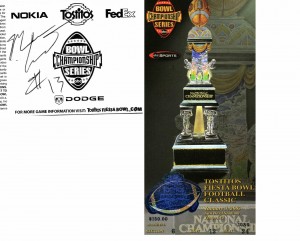 Twelve years ago I was so blessed to witness live Ohio State winning the Fiesta Bowl National Championship with my 15-year-old daughter.   I vividly recall screaming at the top of my lungs, throw the flag, throw the flag at the ref who nearly turned the greatest g 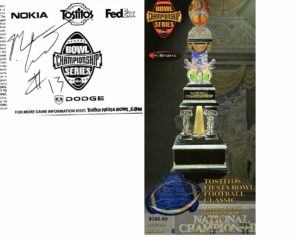 Valued Ticket stub with only one autograph on it, Maurice Clarett’s

ame in college football history Read Here for the Game Recap    into the worst no call in history. I knew it was my voice from 40 yards away that caused him to pull that flag out.

Instead of yet another horrible memory and loss, mine and all other tortured Cleveland and Ohio State fans pain came to an end. What a thrill it was to watch Maurice Clarett, an Ohio kid from Youngstown, scoring the game winning TD and then the D’ stopping Miami in the 2nd Overtime for the Buckeyes victory. A few days later we were flying from Phoenix and boarded our connecting flight from Cleveland to Columbus.   My daughter Erin

and and I were the first to board the small plane and she walked quickly on to the plane ahead of me when I stopped in my tracks. Sitting in the first seat all buckled in was none other than the hero of the game and the guaranteed future NFL star Maurice Clarett.   No doubt he was one of the most talented freshman players ever and a sure bet for $millions. How lucky to meet him, I wondered if he was stuck on himself like the media portrayed him?

Instantly my view on him changed when I looked him in the eyes and said, Maurice?   He looked back in mine all serious and said, huh, you have me confused with some other guy, I just look like him.

I was flush red with embarrassment, then he burst out with a huge grin and laughed out loud, yeah man, you a fan? I said you bet, just coming back from the awesome game, why weren’t you on the team plane? He said Coach Tress said I could fly home for a few days first, so I’m just headin back to Columbus now.

He said, great to meet you, and we shook hands.  I don’t get googly over meeting famous people, but that moment was pretty cool considering we were still pumped over the game. Every person thereafter went through similar greetings, he did not turn a single person away including everyone on the plane who came up to him for autographs during the flight.

Of course, Erin and I both got our tickets autographed, to which I have proudly displayed mine with the #13 as the title pic for this posting. 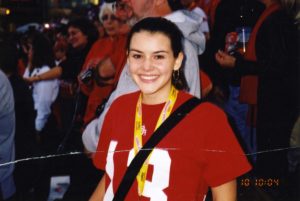 I was thinking, when he gets really rich and famous, that ticket will be worth a lot. What really changed my view on Maurice is the conversation I had with him regarding my sister who tragically was murdered in a domestic dispute a year earlier. We were just a couple of rows apart. I brought it up with him to share my understanding of what he had gone through. He was receiving little consolation, in fact, he was being trashed by the media and some as not committed to the team. It seemed unfair to me so I wanted him to know not everyone had the same view.

The ‘controversy’ portrayed Maurice as a spoiled troublemaker and ignored the pain he felt regarding the death of his best friend who had been shot during the time before the game. read here about it Much to my amazement instead of discussing how he felt about his situation (and I did probe), the whole focus of our conversation was about my sister.   The deep concern in his voice and eyes for our family and little old me was obvious. This young man was real.

Real people, if you don’t know it, are often misunderstood and taken the wrong way. Sadly they are taken advantage of as well. I often feel that way, but I would rather be me than somebody I am not. I believe Clarett and I have similar takes as in that short flight I felt a bond with him, although we never met again thereafter.  I knew he had some anxiety issues, maybe that was the glue to the bond.

The funniest and most memorable moment of the flight came midway when the pilot popped out of the cockpit, just to visit with Maurice. The obvious Buckeye fan had already made an announcement over the p.a. earlier that Clarett was on board and we all did on OH – IO cheer back and forth with the pilot and cheered wildly through his much different than normal flight routine speech.

The pilot came out to have a chat with Maurice. If a black person could turn white as a ghost from fright, at that moment I am fairly certain Maurice did.   The pilot was most likely unaware that this 19-year-old tremendous athlete who had just played before millions of people on TV had a deep fear of flying.   read here about it

The pilot came out with a pile of magazines and papers and a sharpie and asked if Maurice would mind signing them for him and his kids.   Clarett stretched his body around the pilot in the aisle to look and see who was flying the plane. This being a small jet it was solo, just the pilot and one stewardess.

He sheepishly asked, who is flying the plane? The pilot said, oh these things nowadays are all programmable, I have it on autopilot. We do it all the time, he said to calm Maurice’s obvious look of panic. The two continued to have a conversation with the pilot explaining that there was nothing to worry about. I could tell Maurice was not buying the explanation whatsoever and he was visibly upset.

The pilot pulled the cap from the sharpie and asked him to autograph one of the magazines. For the first time he refused to give the autograph.  After signing for everyone and being jovial and polite the whole trip this time he said, ‘I will sign whatever you want me to, including the shirt on your back, your hat, anything, if you would just please go back in the cockpit and fly the plane. ‘   I could not help but to burst out laughing as only the pilot and I were in on the conversation.

I looked at the pilot and said, seriously man, I think you probably should go back in there, or he is going to jump off the plane. You really don’t want to be responsible for that do you?  With that, the pilot and all of us laughed and he headed back to the cockpit.

Maurice Clarett made some big mistakes after that flight that cost him more than just a football career.   Little did I expect after our in-flight encounter what would happen to his life and career and that touchdown would be his last carry for OSU and never would he touch a ball in an official NFL game.

For a while I thought, of all the players to run into and sign/ruin my ticket, it had to be the one guy who many say disgraced The mighty Ohio State University.  For a horrid portion of his life he ended up in prison for 4 years.  But maybe that portion of his life was a strange destiny of reaching people that no other path would have allowed.

Maurice has turned his life around and is on a mission to take his story of redemption to many.   His story is one that we seldom hear from an honest lay it all out viewpoint.   Well worth the time is to read his latest book, Redemption, and see all he has done to turn around his life via his website  and read about how his story is helping thousands.

If you have not watched ESPN’s 30-30 titled Youngstown boys, it is a must see. Also keep tabs on him on his Facebook Page.

Today, I would not sell that autographed ticket for any dollar amount.   Not because he has become famous and a much sought-after speaker, but because we had a time shared where I saw the realness of a young man at the top of his life, only to see that real person go through hell.

No matter whether we are some promising athlete or just an Average Joe, we all make mistakes that will either cause us to be better or cause us to want to ‘fly away and hide’ because of mistakes made.

Which do you choose?   How do you overcome it?    If you want to keep on living as is, stop now, if you want to hear how this man overcame his fears and faced his failure, read on…

If this is your first time visiting Average Joe’s Portico, every post is written in two parts. You have just read the portion challenging the mind, body, and soul.  In The Portico I seek to tap into your spiritual side, but only IF YOU DARE.  Tap the Red Line Below to hear the Spiritual side of the story.  (For more info – read the ‘Do You Dare’ Tab.

I started this blog to share some of my many mistakes in hopes it helps other people to not make the same ones and to use my good and bad lessons to help make your life better.

A little like Maurice I not only had a fear of flying, but fears of what people would say if I talked about my worries and mess ups.   If you are reading my blog for the first time you can read about me in the About section.

But Maurice Clarett’s story is way bigger than mine.   This man has been a huge example of how to put aside mistakes and forgive oneself and others that did him harm. And to overcome the fears and shame of a mistake to carry a message helping others to learn from his errors.

He learned from them and is now doing what he can to help others in the everyday struggles of life that we face on earth. If you watch ESPN’ s documentary, it doesn’t really tell what caused the biggest change in Maurice Clarett’s life.   This video of an interview at a small church in Marion, Ohio, tells the whole story.   Do you dare to find out more, if so, take the 42 minutes to find out by watching this interview: Maurice Clarett interview