I found grandma in the church basement. 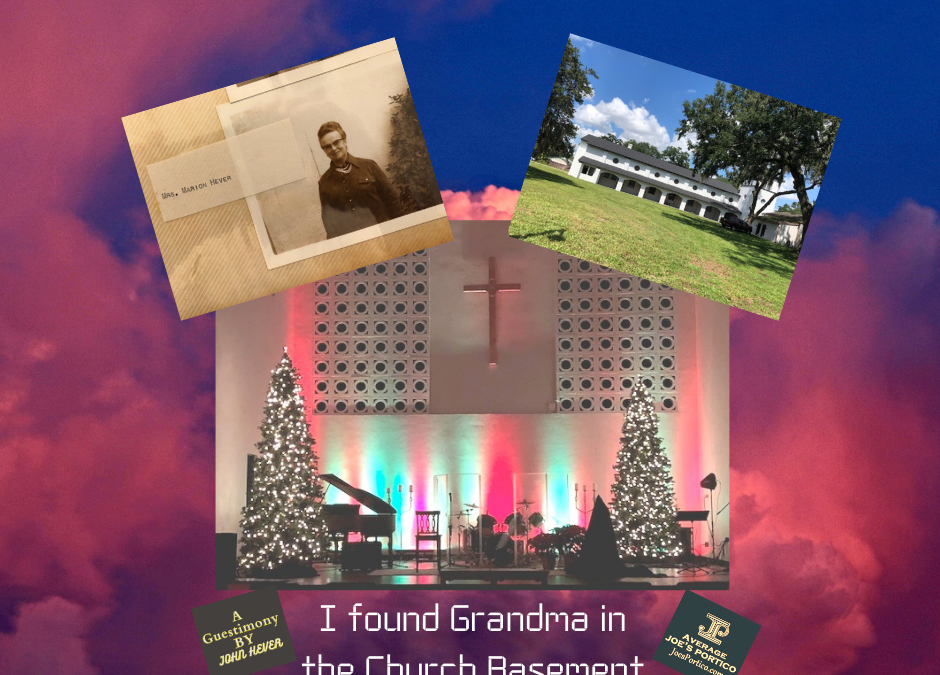 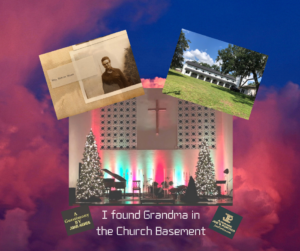 I Found Grandma in the Church Basement

This Guestimony is brought to you by not just an acquaintance; John Hever was the best man in my wedding 35 years ago.  We were roommates living what we saw as a radically crazy Christian life on both the campuses of Ohio State and Bowling Green where we were part of a new church plant. Others including our parents just thought we were nuts but not in God’s universe.  John later stayed on as a Campus Ministry leader in BG, then Ball State, before settling the past decade or so as Lead Pastor of H20 Church in Orlando (as pictured).  He most recently penned his new book The Hidden Delight of God which is a must buy found on Amazon Here.   Be sure to read chapter 8, some average Joe is mentioned in it by my friend whose life defines the word authenticity. He was always the real deal then and has kept it up for the 40 years I have known him, no facades.

For so many people, this past year has been the most difficult, crazy-making, frustration, confusing, God-where-are-You seasons of life. It feels like God has ghosted us. And so, I share this story of hope.  Sorry if by the title you are looking for a Steven King story, not even close.

About four years ago, a 70-year-old man named Roger—who had never been to church—walked into the Sunday service for the church I lead. Six months later, he becomes a believer.

Then Roger invited his friend, John, to come to my church (CH2oChurch) , as well. John and I would meet once a week and talk about God. Like many people, he had a lot of intelligent spiritual questions. One day, John sent me a cryptic text, “Please meet me at my office and bring your Bible.” Not the kind of text I typically get. John’s hands were shaking, his voice trembling as he told me, “I’ve hated God my whole life. But I’ve come to believe Jesus died for me.”

Three years later, these two new believers in Jesus sent me another cryptic text, “Meet us at 2113 E. South St.” I showed up and saw that they both had impish grins on their faces. I had no idea why we were meeting.” Roger spoke first: “John, we GIFT this building to you, and to H2O church.” Gift, as in FREE. This is a $1.5 million building. 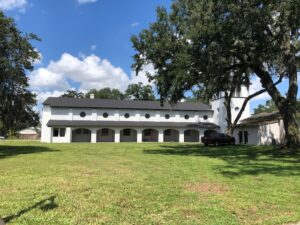 A few months later, my mom came to visit. As we were about a block away from arriving at the church my mom casually drops, “Hey, your grandmother lived right around here…I remember walking with her to church.”

No way, I was thinking. My mouth just hung open. I stopped the car and stared at my mom. “What did you just tell me?… Mom, if Grandma Hever went to church around here, it has to be the same church building that was just given me.”

So two weeks later, I was pulling out some old membership photo albums from the previous church, and a thought coursed through my brain…What if…?

I then turned the page…and found my grandmother, Marion Hever. 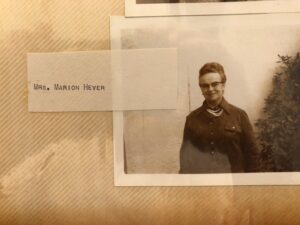 My hands were literally shaking as I showed everyone how I had found grandma in our church basement.

Then I remembered…I attended a church one time with my grandma about a year after becoming a Christian. Pause. I realized…

I was here, right here, in this building, 38 years ago.

And now, God has GIVEN me the same building…the church my grandma used to attend….And I think God smiled…And I thought to myself, “You’re just showing off right now aren’t You, Lord?” 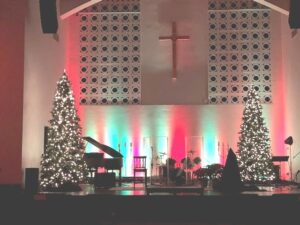 Then I did some math.

What is the likelihood of me becoming a believer who became a pastor, who was gifted a church that my grandmother once attended, by a 70 year old man and his friend?

But how often are churches actually GIFTED to someone? Like, never. But let’s say 1/100 at best? (I think it’s way, way lower, I had never heard of such a thing, have you?). So, 1%, or .01. But how many Americans become believers in Jesus and then become pastors? With 330 million people in America and 600K clergy, that’s roughly 1/550, or .0018. How often does a completely unchurched 70-year old man who had never set a foot in a church building ever before come to Christ? Only 6% of Americans become believers after age 30, so after age 70, it’s probably way lower than 1%, or .01. We multiply this out and we arrive at…

Let me put this into perspective.

In other words, it is 20 times more likely that my wife and I would randomly choose the same star to live on, out of all the stars in our galaxy than for…

me to become a Christian and a pastor,

and a 70-year old man to become a believer,

for him to then give us a church building,

which my grandmother happened to go to, and I found her picture in the basement!

The story is amazing!  The math is astounding!

I do not believe this was a coincidence. I believe it was a God-incidence, something planned in eternity past by the God who says, “before I formed you in the womb, I knew you…” (Jeremiah 1:5)

I think God just did a mic drop.

I know Joe usually has a softer intro story without church talk, but he let me break the rule this one time.  However, I have to go a bit deeper and talk about the hidden secrets of both our hearts and maybe yours on how I picture the heart of God towards us.  If interested go in the Portico as Joe calls it, if not, thanks for reading part one about this amazing God-Incidence.

If this is your first time visiting Average Joe’s Portico, every post is written in two parts. You have just read the portion challenging the mind, body, and soul.  In The Portico, I seek to tap into your spiritual side, but only IF YOU DARE.  Tap the Red Line Below to read the Part 2 Spiritual side of the story.  (For an explanation of my madness – read the ‘Do You Dare’ Tab)

E HIDDEN DELIGHT OF GOD is a revelation of the heart of God.  My book focuses on Moses who was a fighter on the outside but fearful on the inside.  Joe and I both had reputations a little different from the average what he called soft-spoken Christians.   We had hard shells that life itself has tried to crack open many times.  However, over time with kids, losses, grief, and working with 1000’s of people with many good but also difficult moments that shell has been softened not by life; but by a God who loves us more than we can imagine.  Here in the Christmas season, I share my favorite Biblical story which reveals what most see as the one who messed up and came back.  It’s not about us but about He who loved us.  How can we not talk about it?

The story Jesus told us to reveal the heart of God called the parable of the prodigal son goes like this.

And He said, “There was a man who had two sons. And the younger of them said to his father, ‘Father, give me the share of property that is coming to me.’ And he divided his property between them. Not many days later, the younger son gathered all he had and took a journey into a far country, and there he squandered his property in reckless living. And when he had spent everything, a severe famine arose in that country, and he began to be in need. So he went and hired himself out to one of the citizens of that country, who sent him into his fields to feed pigs. And he was longing to be fed with the pods that the pigs ate, and no one gave him anything.

I have a painting of the prodigal son that hangs by my front door, a daily reminder of the Father’s heart. In this painting, the father embraces his wayward son with the sort of bear hug that catches you off guard and takes your breath away, so filled with affection and warmth. The father has a look of sheer delight that, to me, seems … strange. Surely not. Surely, God’s love cannot be this exuberant. Wild! Expressive! 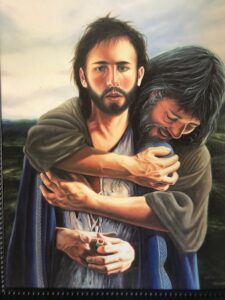 This image of the father’s love deeply moves me, but what I can’t turn away from is the emotion captured in the face of the prodigal son. As he experiences the love of the father, there is a bewildered look in his eyes, as if completely stunned. A state of surprise, no—absolute shock—has come over his face. A solitary tear trickles down his cheek, telling us the message of his heart; I can’t believe this is happening.

This is the story we’ve been given. This is the antidote to the insidious lies we believe. Clearly, Jesus wants us to embrace an image of God the Father that disturbs us. That wrecks us. That makes us pause and wonder if we really have any idea who God is at all.

There is so much that we hide in our own hearts that until we truly see the hidden side of how much God loves us, we do not realize how little we understand.

God had to do something truly amazing such as dropping a free church in my lap tied to my grandmother that went steps beyond my comprehension of just how much God goes after us.  In addition, it’s filled with delight and joy not a rod.

There is so much more to reveal. If I have whet your appetite I would love to have you find here more about my struggles and triumphs, but most important provide a view into The Hidden Delight of God.   You can pick it up on Amazon, available in paperback, Kindle, and Audible or find out more at my webpage  howtoliveunleashed.com.

P.S. A note from Avg Joe I hate popup ads and sign up requests everywhere don’t you?   But, getting word out on news posts for free is a tough task on social media.  If you would like to be notified about new posts and guestimonies and an occasional insiders only heart-pour, pop me a quick email to JoesPortico@gmail.com and I’ll add you to my mailing list.   If you have a miraculous story or testimony, and I know John’s story is tough to top but don’t let that hold you back, let me know and you can have my space to tell yours in the new Guestimonies category. Please share John’s story on social media, I know John and I only want the story to give God Glory!

Please share your comments, your thoughts may be what others are afraid to say.  Anonymous posts are allowed, but subject to good taste lest it be deleted. Email address is only required to prevent trolls.