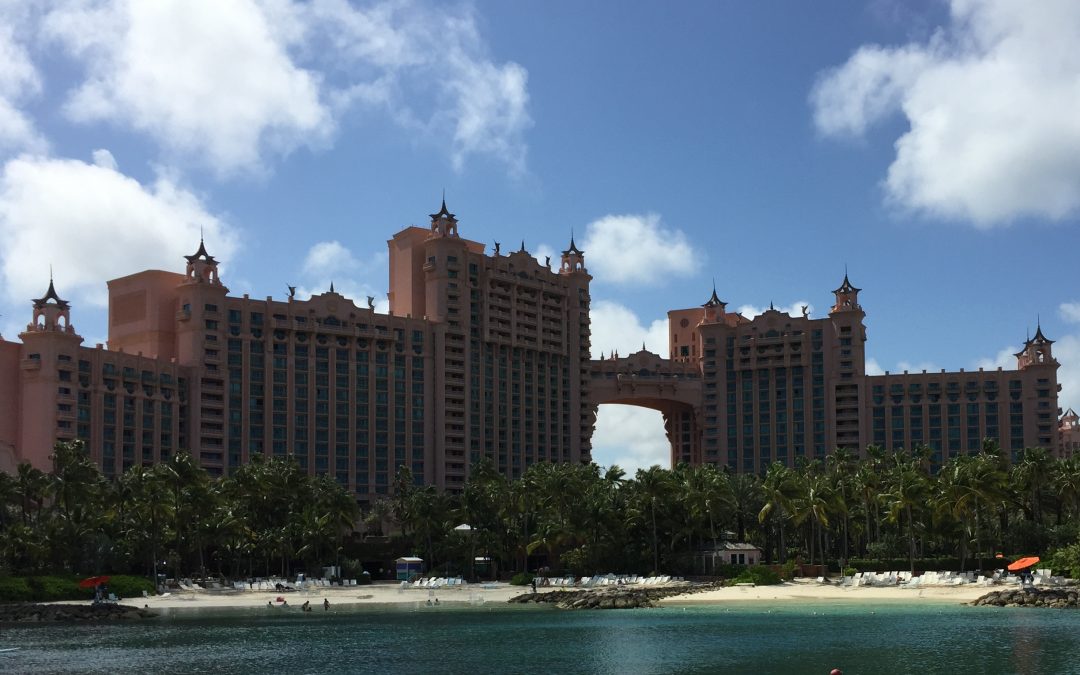 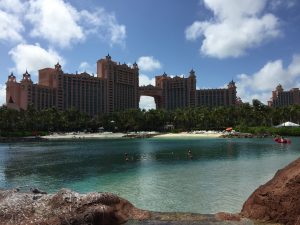 Them: “Don’t worry, you’ll find us, we’ll be in the tunnel with the aquarium just on the other side of where we ate.”

Me: ‘I think it’s a bad idea, but if we do miss each other, hang by the ‘same’ bathroom where we entered onto the Atlantis grounds.’

Those were the last words we exchanged before being separated, lost, and totally panicked in Atlantis as time was inching towards being left behind by the Carnival cruise ship, Fascination.   What were we to do with no I.D., no money, no phone, no passport, and nothing but our swim trunks, a t-shirt, and some godforsaken flip flops?

Little did I know as my son and I hosed off the sand clinging to our feet from the beach after a leisure surfboard jaunt in one of the Atlantis coves that we were about to cover, on foot, the entire 400 acres of the grounds in search of my wife and daughter. 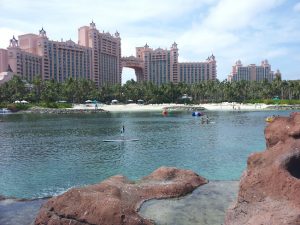 It may have helped for us to do a little research before getting off the boat, but I was the one who said, I make major decisions with facts every day of the week, for this vacation we’re just going to fly by the seat of our pants and have fun –  for once. ‘With only 8 hours on land let’s just go with the flow’, I said.

When my daughter Erin so loosely said meet us by the ‘aquarium,’ whodda thunk, there were 12 coves and 8million gallons of ‘aquarium’ water via tunnels to navigate through. See some breathtaking pictures of Atlantis’ Coves Info Here.   It is too bad we didn’t get to enjoy much of it until arriving back home to research on the internet that the hell we had been through was in the midst of ‘paradise.’

Around 2:30 with a 4:30 sharp boat departure (explicitly we were told if you are late, you WILL be left behind) my son and I leisurely headed in the direction where we expected to meet up with my beloved wife and daughter.   In a matter of minutes, we found the pink rock aquarium tunnel.  Remarkably, it looked exactly like the one we walked through from the beach to get to our lunch destination.   We weaved through the maze admiring the manta rays, just like the ones that we snapped pictures of earlier in the day. 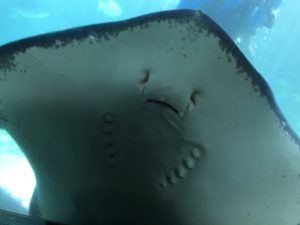 Surely this was the right aquarium, and we would run into them shortly.   We came upon a fork in the tunnel, and I remarked that I don’t recall us having a forked option on the last walkthrough. We opted to turn right. After about 100 yards of weaving, we reached a cove that did not look familiar. It was beautiful, like all the others. But having not bumped into the rapidly becoming, ‘why did you guys not stay with the plan to come back to where we were swimming,’ beloved wife and daughter,  we had to reverse direction to find the fork.

We picked up the pace heading back through the same tunnel and mused that it sure would not be fun to be late and miss our boat.   Having reached the fork again, we went down what would have been ‘left’ and trekked through the tunnel that now looked exactly the same as the other.   At the end of this tunnel was the men and women bathrooms.   Since our meet up partners were not there, we opted to relieve ourselves and hoped upon exiting that they would appear and everything would be fine.

After waiting a few minutes in hopes that maybe they recalled the statement that they should ‘hang by the bathroom,’ we debated on whether this was the right aquarium or not and that now we should try to find the original tunnel that went back to the beach.   We really picked up the pace and fast-walked backtracking through the tunnel. We passed the fork, we think, .. maybe, and trolled down the tunnel. Upon exiting, we were fairly sure we were at the original starting point. But who knows if we really were.  All I know is, we did not meet our party.

The thought came to run back to where we were swimming as time was passing quickly. The heat was picking up, and I realized with no money, I couldn’t even buy a bottle of water to quench the thirst that was descending on my tongue. Surely they realized something must be wrong so they might go back to our swimming cove. We found the cove, but not my – ‘why do they always do these things, I know they just like to get me worked up’, beloved wife and daughter.

Panic was starting to set in, and my heartbeat, pulse, and sweat beads were increasing rapidly. We stopped by the surfboard rental stand and asked the Bahamian (not sure if that is what they call themselves or not) if she had seen them. ‘No mon’ was the answer.

We took off running and found another tunnel, with aquariums and lots of pink rocks just like the others.   I was praying to God that this was the tunnel that would go back to the beach, the one we trekked through leisurely and lovingly together on the way to lunch.   It seemed like we never would reach the end of it when finally sunshine appeared and we made it to the end. Since I was praying, I knew this was our destination. My awesome wife and daughter would be sitting there waiting, and we’d hug and kiss and blame each other for who messed up the directions, but laugh and be happy we found each other.

As we rounded the curve and hit the sunlight, there on the other end of this tunnel was an awesome and beautiful cove with sea turtles swimming around.   This was not the sight we wanted to see.

We were lost in Atlantis…..

If this is your first time visiting Average Joe’s Portico, every post is written in two parts. You have just read the portion challenging the mind, body, and soul.  In The Portico I seek to tap into your spiritual side, but only IF YOU DARE.  Tap the Red Line Below for the Part 2 Spiritual side of the story.  (For the Portico story read the ‘Do You Dare’ Tab)

I love reading the statistics that say things like only 1/1153 of couples that pray together end in divorce. I hope that statistic is true!   A great article just on that subject to take just five minutes a day to pray together has already been written.

Praying means simply talking and conversing with God.   Sometimes we do it out loud, but mostly quietly and in our minds.  As we were strolling, then walking quickly, then running, my mind moved between pleasant thoughts, to worry, to PANIC.   My prayers went from, God you have created some awesome things, praise you for these beautiful ocean creatures, to God can you help us find these two so we can get back on the boat, too oops sorry for those terrible thoughts I just had about my wife and daughter, to GOD, please help us find them so we don’t get stranded on this island with no money, no I.D., no phone, no anything, we need you – HELPPPP!.

I’m sure nobody but me reacts in such a way in similar circumstances.

Come back tomorrow to see what happened next.   If I get over the seven job crises situations, I have to work through here on a Friday that is, I hope to write it up in the morning.  Why do we even go on vacations?  The return time to catch up on the work left behind almost makes it seem like it is better to not take a vacation.  Especially if you get lost in paradise!!!!!