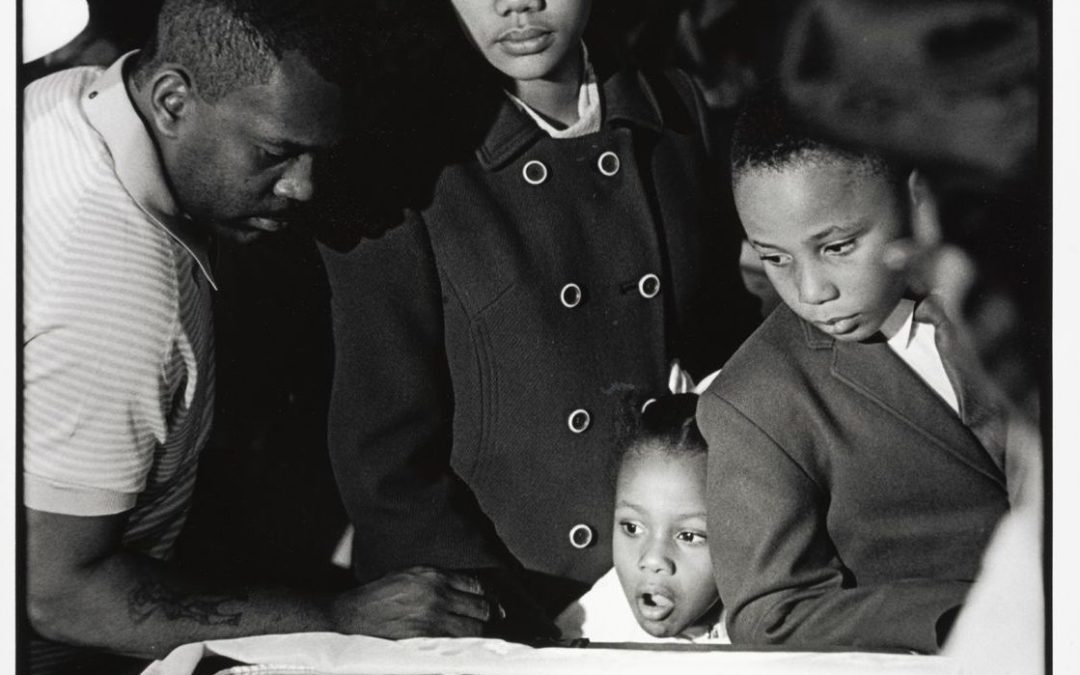 Today we ‘celebrate and honor’ the life of Martin Luther King Jr.  It is fitting that we honor a man who sought peacefully to fight the injustices that were prevalent in his era on his birthdate, rather than his death date.  At the same time, it is sad that were it not for the murder that ended his life, his mark on history would be slight.   It was a moment leaving his family behind at the age of only 39 that brings no celebration.  Must it be – The Price Peace-Makers Pay? 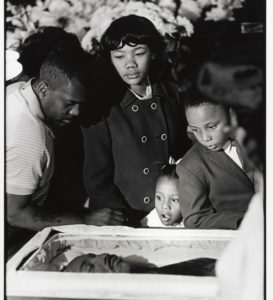 A few weeks ago the National Historical Society purchased King’s home in Atlanta and has plans to preserve his birthplace home.  The state of Georgia and city of Atlanta proudly proclaim Dr. King as their hero.  But did you know that while he lived in Birmingham, AL (where his home had been bombed, dynamite sticks found on his porch, and multiple death threats had been made) King was considering moving back to Atlanta, but the Governor tried to prevent him from doing so.  The Stanford MLK Research Institute notes:

Upon learning of Martin Luther King’s proposed move to Atlanta in December 1959, Georgia’s Governor, Ernest Vandiver, declared that King was disruptive to the state’s “good relations between the races” and vowed that the civil rights leader would be kept under surveillance. Vandiver claimed that “wherever M. L. King, Jr., has been there has followed in his wake a wave of crimes including stabbings, bombings, and inciting riots, barratry, destruction of property, and many others.”

Further, In the midst of the 29 times that MLK was arrested and put in jail (for crimes like sitting in a whites-only spot on a bus) in Atlanta the Gov added:

Following King’s arrest in October 1960 for his participation in a sit-in a department store restaurant in Atlanta presidential candidate John F. Kennedy made a phone call to Coretta Scott King expressing his concern for her jailed husband. Publicly, Vandiver told reporters: “It is a sad commentary on the year 1960 and its political campaign when the nominee for the presidency makes a phone call to the home of the foremost racial agitator in the country.”

Despite all of the atrocities of bigotry that were prevalent in the day; the governor somehow twisted and placed the blame on the one fighting for justice as the agitator.

It is not far-fetched to view similar patterns today in our society of how peace-makers are seen as the bad people.   There are many views to consider in today’s society pick your poison; immigration, wall, abortion, education, racism, sex-trafficking, media-wars-and-lies, equal pay …  I wonder which topic MLK would focus on today?  Would peaceful demonstrations bring change?

The one thing we must learn from the man we honor today is to not allow those in power to ever think that silencing people is the solution.  While we seldom see arrests and thank God the killing of leaders has lessened, closing our eyes and ears due to the noise is NOT a solution.  Allowing conglomerates that control the media and new media (Google, Facebook) to control what people can and cannot see is an atrocity that must be stopped.    If you think it is not a problem, then you are wearing blinders. 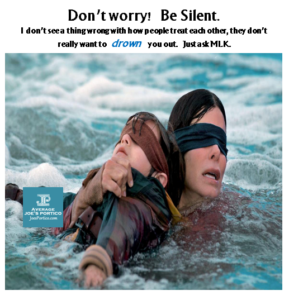 Some may question my choice of putting a picture of MLK’s funeral as the main caption.  What we cannot allow happening is MLK’s memory to turn his legacy of peace-seeking for all, which was silenced, into a day where Easter eggs become the theme.   MLK overcame fear and exemplified bravery which is why I as an old white guy consider him as my hero.  I worry about many things.  The thought of ever having my wife and kids looking at me in a coffin because I spoke up for the rights of the abused is horrifying.    At the same time, were I to go I would want to be sure that I had counted the cost like MLK did in what I think was his greatest recorded speech.      (not to downplay the I had a dream speech)  It was his story of when he overcame his real fears.  It also was the step he took that ultimately became, The Price Peace Makers Pay.

There was one who also paid the ultimate price that sought to bring peace to people, yet was considered a ‘division causer.’   If you dare to delve deeper on this topic, continue on…

If this is your first time visiting Average Joe’s Portico, every post is written in two parts. You have just read the portion challenging the mind, body, and soul.  In The Portico I seek to tap into your spiritual side, but only IF YOU DARE.  Tap the Red Line Below to hear the Spiritual side of the story.  (For more info – read the ‘Do You Dare’ Tab)

For those in the church-going world knowing the Bible is of utmost importance.  We are wise to memorize those verses that help us to be brave and overcome our fear of people and things that might happen to us if they object to our view.  I keep ones like
“The Lord is with me; I will not be afraid.  What can man do to me?   Psalm 118:6   tacked to my bulletin board.

Lately a profound but seldom heard one has found a more prominent place John 7:43 – ‘So the crowd was divided about him.’    ‘Huh?

We’re supposed to be peace-makers are we not?  Jesus came to be the light of the world, the salt of the earth, and that is what we are supposed to bring.   He did such an awesome job of speaking in front of people and had 10,000’s of people following him.   They were attracted by the words of love He brought and wanted to see the miracles He performed, and to be healed themselves. There were no big stadiums and parking lots to handle 100k size crowds, but somehow, Jesus brought in those crowds, similar to the size MLK had at the Lincoln Memorial.

Yet we find the people were wearing blindfolds:   “But despite all the miraculous signs Jesus had done, most of the people still did not believe in him. This is exactly what Isaiah the prophet had predicted: “ Lord, who has believed our message? To whom has the Lord revealed his powerful arm?” But the people couldn’t believe, for as Isaiah also said, “The Lord has blinded their eyes and hardened their hearts— so that their eyes cannot see, and their hearts cannot understand, and they cannot turn to me and have me heal them.” Isaiah was referring to Jesus when he said this, because he saw the future and spoke of the Messiah’s glory. Many people did believe in him, however, including some of the Jewish leaders. But they wouldn’t admit it for fear that the Pharisees would expel them from the synagogue. For they loved human praise more than the praise of God.  John 12:37-43, 46-48 NLT

But it was those in power, even though some of them believed in Him also, that could not stand the fact His popularity took

away their power.  It says they were blinded, like the Bird Box pictures we all see daily.

Even though he was right, they could not give up their positions.   It is similar to our two-party system today.  BOTH sides (believe it or not) have some things that are right and some that are wrong.  Yet because of the inability to relinquish power or show any weakness we have politicians willing to let people miss out on having better lives to gain their own selfish party status.  Even when the decisions are simple, they will shout out at each other, systematically drowning out the others voices, to prove their point and stifle the other.  Let’s face it, we all knew there was a need to fix the healthcare issue, yet one side staunchly stood by to not allow it period. Thus we have a worse system approved than before.  Currently, there is a stupid battle over immigration control, yet those who were all for it for years, suddenly today they are not – just to prove a point.  We all lose because of it.

What is it besides control that caused the crowd to be divided against Jesus?  Aside from power, aside from control, why would the religious leaders be against him?  To find out, we look a little deeper at the I had a dream speech, er excuse me, John 7:30-44   in easy to read terms from The Message version, :

On the final and climactic day of the Feast, Jesus took his stand. He cried out, “If anyone thirsts, let him come to me and drink. Rivers of living water will brim and spill out of the depths of anyone who believes in me this way, just as the Scripture says.” (He said this regarding the Spirit, whom those who believed in him were about to receive. The Spirit had not yet been given because Jesus had not yet been glorified.)

Those in the crowd who heard these words were saying, “This has to be the Prophet.” Others said, “He is the Messiah!” But others were saying, “The Messiah doesn’t come from Galilee, does he? Don’t the Scriptures tell us that the Messiah comes from David’s line and from Bethlehem, David’s village?” So there was a split in the crowd over him. Some went so far as wanting to arrest him, but no one laid a hand on him.

If you read the whole chapter, we find this was when the Pharisees, rulers, and leaders decided Jesus needed to be silenced.  Had he come and visited them solely and given this good news I think all would have been fine and none of the leaders would have objected.  But Jesus did what no ruler, no leader, no rich with money and power person wants to give up,  EQUALITY!

Jesus was offering what only the Priests of the time had rights to, a one-to-one relationship with God.  He offered it to anyone and everyone.   How absurd that an Average Joe, with no seminary degree, can be given knowledge of a relationship with God.  How can just anyone be given the same exact amount of power that only those who worked hard for it received?  Those Pharisees worked hard to get the money and mansions and the position to speak in front of people.  How dare Jesus offer it to ‘ANYONE.’

Well, He did.  Have you received Him into your life?  (see my About section for more to know how).

But we all know the story of what happened after this, that Jesus was crucified and died at the hands of those who could not relinquish power.  Those men who could not stand the possibility of equality for all had him put to death.     I am so thankful that Jesus paid The Price Peace Makers Pay.   Are you?

Please share your comments, what struggles with hurt do you have?  How can we help you move from a position of worrier to one of a Warrior?