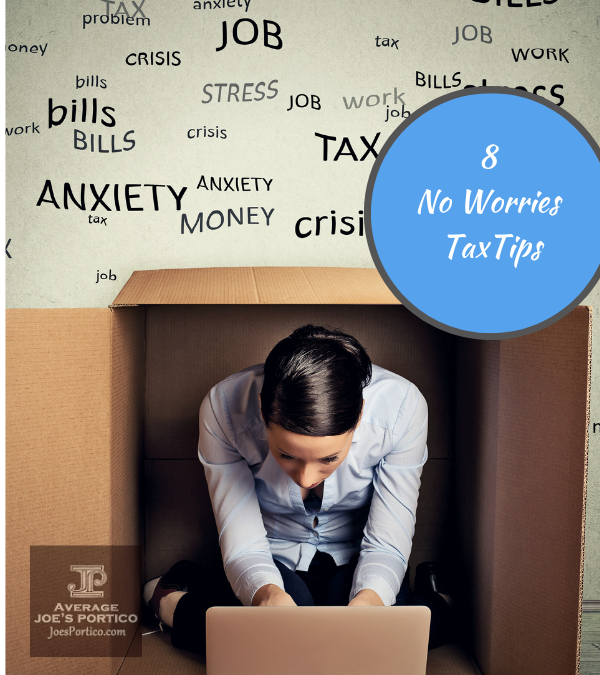 Tax season is upon us, and for worriers, it is hard not to have anxiety in getting those tax forms and checks sent out to the tax collectors by April 15th.  Not to brag, well forget that 20 hours later, to brag, I mailed all my forms and figures off to the Accountant Friiday.  Being prone to worry I have developed a worry-free system for filing the taxes for 42 years.  Perhaps you might want to hear a tip or two.  Instead of reading the ridiculous complaints by some writers that ‘many people are shocked this year they will not be receiving a refund check,’ (hello) here are 8 No Worries Tax Tips, from an ex-worrier that fought through the tax season angst like a warrior.

Many years ago our Accountant, the same one who had penciled (he always used a pencil for every form) our taxes 7 years in a row, missed a digit on our daughter’s social security number. We did not catch ‘his’ mistake.  Six months later we got an audit letter stating we had underpaid our taxes and overstated our number of dependents and deductions.

Being a Worrier this was not the happiest of letters for my wife, and I’s anxiety meter.  I don’t know what it is about letters in the mail that make you feel like a criminal, but it always sets off both of us into fear/worry mode.  For the people who say,  the worry is always a matter of not trusting,  explain how even the appearance of the envelope in the mailbox sets the heart off racing?

Tyrant Sam said we owed back taxes, were subject to interest charges, late fees, and potential jail time for fraud.   Despite the fact, we filed a report for our daughter, age 9, for capital gains and interest income (a legal way at the time to save money for her college future by investing under her tax bracket provided it is her money for schooling) they did not notice.  They also did not notice the previous 8 years of the deduction with her name and social security number was only slightly different.  Ahhhhhhh!

It was our mistake for not catching the error by the Accountant.  Just like any 1099 your bank fails to send you but tells the Fed about an interest amount.  Just like any deduction you makeup or don’t have a receipt for.  When our Accountant sent us a bill for doing all the paperwork refiling and audit follow up, I was livid.  He had said part of his service was helping with audits ‘which are common, it is what it is.’ He could not spend 20 hours to fix a problem for free.  He did charge a lower hourly amount, as he owned up to his mistake and we continued to use him until changing states.  The bottom line lesson was the tax forms have our name on them, we have to own up to every line on the legally signed documents.

We work hard in understanding the general rules and plan ahead  I am astounded here in 2019 at the headlines of people griping they will get smaller refunds despite tax cuts made by Congress over a year ago.

Hello, tax refunds are not a bonus to use for spring break vacations.  Tax refunds mean you loaned the government YOUR CASH.  They are merely giving it back to you 16 months later with no interest.

For most people, their tax rate was lower than 2016, but the withholding amounts from your paycheck were adjusted, for your benefit, to get a bigger paycheck.  It was your responsibility to take that extra money and either pay down debt or put it in the bank and draw FDIC interest or invest it in growing.

Personally, along with our budget and annual total-worth spreadsheet that I update regularly, I also record my own analysis of the tax filing.  Along with all the forms I email the spreadsheet to my Accountant everything that I think I should be able to deduct, and all the income/loss/capital gains stuff is listed on the spreadsheet.  It is a second checklist to make sure no forms were missing, and yes if your broker forgot to mail the form or the post lady lost it, they certainly filed it with the IRS.  You better make sure that they mailed the form, and it is correct).

I put big question marks asking things like ‘how much write-off do I get for those 15 boxes of clothes my wife donated to the homeless shelter?’.  ‘Was it worth it for me to spend 36 hours documenting it?’  If your Accountant refuses to answer such things, find a new one.

So please don’t stop here.  Did you know Jesus talked about taxes, how’d you like to hear His view?  If you dare to see the Portico view, read on …

If this is your first time visiting Average Joe’s Portico, every post is written in two parts. You have just read the portion challenging the mind, body, and soul.  In The Portico I seek to tap into your spiritual side, but only IF YOU DARE.  Tap the Red Line Below  to hear the Spiritual side of the story.  (For more info – read the ‘Do You Dare’ Tab)

If a poll were taken amongst all people religious or atheist and everything in between I am fairly certain all would agree on one thing, we all hate taxes.  That is unless you are a tax collector or a dictator benefitting from the unscrupulous collecting of taxes to the detriment of the people.  Such was the scenario in the time when Jesus walked the earth.  The Roman Empire rulers lived lavishly off taxing everyone from the richest to the poorest.

Having been unsuccessful in trapping Jesus on other subjects the people who hated His popularity set him up more than once on the subject of taxes.   His wise responses revealed more than meets the eye.

Scene 1, modernly described for today’s audience by The MSG version in Matthew 22  , reveals a seemingly succinct response of simply, ‘pay your taxes and shut up.’  Btw, interestingly, Matthew the writer was a reformed tax collector hated by all, but invited by Jesus to be one of His first disciples.

‘The Pharisees plotted a way to trap him into saying something damaging. They sent their disciples, with a few of Herod’s followers mixed in, to ask, “Teacher, we know you have integrity, teach the way of God accurately, are indifferent to popular opinion, and don’t pander to your students. So tell us honestly: Is it right to pay taxes to Caesar or not?”

Jesus knew they were up to no good. He said, “Why are you playing these games with me? Why are you trying to trap me? Do you have a coin? Let me see it.” They handed him a silver piece. 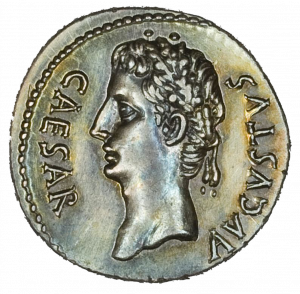 “This engraving—who does it look like? And whose name is on it?”    They said, “Caesar.”“Then give Caesar what is his, and give God what is his.”  The Pharisees were speechless. They went off shaking their heads.’

Scene 2,  provides some deep words from Peter on the subject of taxes, to which Jesus reads his mind and provides a deeper revelation.  This one in  Matthew 17

‘When they came to Capernaum, the collectors of the two-drachma tax went up to Peter and said, “Does your teacher not pay the tax?”

(I find that hilarious, Peter was the loud one arguing about many things and not happy about the state of the world, especially the taxes levied on his former fishing business.  Something tells me the ‘Yes’ was filled with some animation.)

‘And when Peter came into the house, Jesus spoke to him first, saying, “What do you think, Simon? From whom do kings of the earth take toll or tax? From their sons or from others?”

And when he said, “From others,” Jesus said to him, “Then the sons are from the taxes.’ 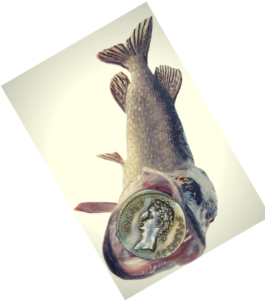 However, not to give offense to them, go to the sea and cast a hook and take the first fish that comes up, and when you open its mouth you will find a shekel. Take that and give it to them for me and for yourself.”

Notice in the above that Jesus waited to speak privately with Peter about the tax issue.  Jesus was careful to not make government and taxes an arguing point.  Despite knowing the people were being cheated and do get abused, it was a side issue and not one to waste a bunch of time and anger on.  (note to self, avoid such conversations on FaceBook)

Although it seemed He also made it a point to not pay one additional cent of the tax, and would most likely ‘vote’ when the time comes to have responsible people with integrity in positions where controlling taxes is a necessary part of running a government.  It is important for us as good stewards of God’s money to carefully manage our giving records, and I believe wisely use all legal write-offs when completing our Tax forms each year.  Be wise with investments, mortgage deductions, property tax payments, donation timing, and other entities that affect your tax rate.

The other key factor perhaps to consider was the coin being in the mouth of a fish.   Most of us are aware Jesus performed a miracle twice taking a few pieces of fish and bread and multiplying it to feed crowds larger than 5000.   God knows all our needs Worriers-changed-to-Warriors!   He knows we have to pay our bills including taxes here in the year 2019.    God meets the needs of all His children including providing money to pay our taxes.

I note though, God should not be required to wave a magical miracle wand for every one of our needs.   He has provided wisdom and brains to take care of ourselves.   Wouldn’t it be ridiculous for God to have to dress us up in our clothes every morning like newborn babies?   Thus, we have been given the skills to understand how the money system works.

If you didn’t know it before, now you have 8 Tips for Worry-Free Tax filing.   And you have a simple but profound view that God will meet all our needs, even the money to pay taxes!

Your fellow readers would love to hear your comments and perhaps questions.   What is your view on taxes, do they stress you out or make you angry?  How do you deal with those feelings?